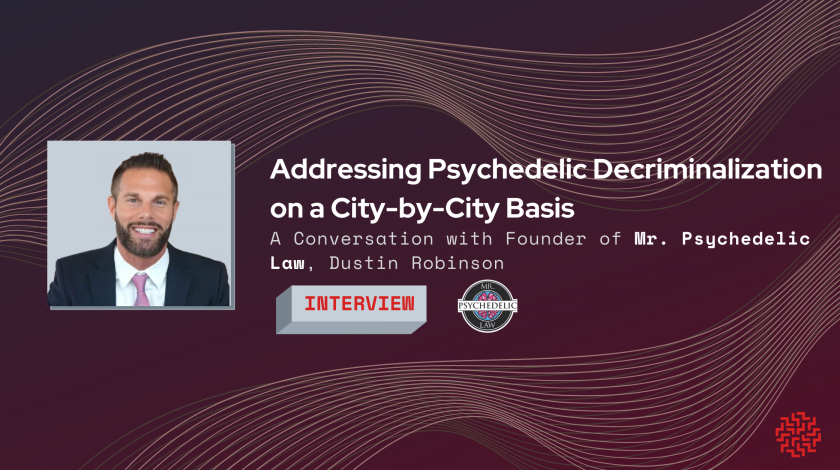 Florida may not be the first state that comes to mind in terms of progressive drug laws, but there is a grassroots movement gaining steam across the state to decriminalize psychedelic treatments for depression, PTSD and more. It’s happening at the local level, in city council chambers and town halls, and is largely the work of one man — Dustin Robinson, a Florida lawyer and founder of Mr. Psychedelic Law.

Dedicated to the use of “medical and spiritual research to drive RESPONSIBLE legal reform in Florida for psilocybin mushrooms and other psychedelics,” the project is an offshoot of Robinson’s law firm, Mr. Cannabis Law, and includes advisory boards made up of doctors, lawyers, spiritual advisors and more.

We recently sat down with Robinson to learn more about his on the ground campaign to decriminalize psychedelics in Florida, as well as what he’s seeing from a regulatory perspective on a national level.

Psychedelic Invest: Let’s start with your background. How did you get into this industry?

I worked at Deloitte for a bit and then went to Holland and Knight out of law school. Eventually I went in-house, running a few multi-state manufacturing companies, and then a couple of years ago I got into the cannabis space.

My firm is a full-service law firm. Our attorneys handle everything from transactional matters to litigation, pretty much every area of the law except for criminal. We don’t deal with people getting arrested for marijuana possession, in other words.

One of the doctors I work with is Dr. Scott Fisher. He’s doing clinical trials on psilocybin and its effect on depression right here in Fort Lauderdale. And I work with another doctor, Dr. Michelle Wiener, and she’s doing some research on it for end of life care relating to suicide.

PI: What have you been doing with this within your network?

DR: When I started doing my own research into psychedelics, I realized that there is huge medicinal value in it. Since then I’ve talked to a lot of veterans and just got connected with a lot of people throughout the country, so I decided to create my own not-for-profit called Mr. Psychedelic Law. We have a medical advisory board that is really made up of the top doctors in the state of Florida. Then we also have a spiritual advisory board of the top spiritual leaders in Florida.

Ultimately, our mission is to use medical and spiritual research to drive responsible legal reform for psilocybin mushrooms and other psychedelics in Florida. We’ve been going city to city going to all the city commission meetings, I’ve drafted resolutions for several cities to decriminalize psychedelics, and we’ve been taking a real city-level approach to this issue.

We’re just trying to educate people around this and building a community around psychedelics to really push for legal reform here in Florida.

PI: What’s the reaction been from folks there in Florida when you bring this up.

DR: Most of the time when I first stand up in front of a crowd at a commission meeting, they think it’s funny or just out there. But I bring doctors up there with me. I bring veterans that have PTSD that have been treated with psilocybin. I bring lawyers and lobbyists up there to speak too, and by the end of it we often get a very good reception.

Everyone has received this really well. There hasn’t been any city or county that has left us out of the room and not let us speak. Unfortunately, the pandemic has slowed down these activities, but pre-pandemic I was working with several commissioners in cities who were willing to sponsor my resolution for decriminalization. That has unfortunately fallen off as a priority this year, but the reception has been very good overall and I’m hopeful that we can pick that back up next year.

PI: What’s your take on the chances for national legalization or decriminalization?

DR: I think we’re getting there. In Colorado, Denver voted for decriminalization. Then Oakland did the same thing. Chicago has a resolution right now, and so does Santa Cruz. So, cities are starting to open up.

Then you have Oregon, which will probably be the first commercial market for psychedelics in 2022 or so. The way their bill that’s on the ballot this year is structured, I think it has a good chance to pass as it gives them two years to study and plan before rolling out a commercial market.

I think it’s looking good from a state and city perspective. From the Federal perspective, unfortunately, most psychedelics are still Schedule 1 substances. But what most people don’t realize is that the FDA actually views psychedelics more preferentially than they even do cannabis, and they have granted limited research into psilocybin for depression and other things.

PI: Has the process that cannabis went through over the last couple of decades helped smooth the way for psychedelics from a regulatory standpoint?

DR: Yes, there’s no doubt. They call cannabis a gateway drug, but it’s also served as a kind of gateway to legalization as well. I definitely think the legalization of cannabis has opened up the minds of a lot of people and has broken down a lot of stigmas. That’s paved the way for other substances to be decriminalized.

PI: Do you see a future of psychedelic treatments beyond what doctors are doing now for depression and PTSD?

DR: I do, and there are a lot of things that can be treated this way. A lot of my doctors are doing ketamine treatments, some for mental health purposes and some for pain purposes. One of my clients is The Ketamine Fund, and they basically provide ketamine treatments for veterans for free.

Most of the clinical trials that are being done, especially from an FDA perspective, are focused on mental health disorders, whether it be depression, PTSD, addiction, etc. But there will be more applications in the future.

PI: Do you think that state-by-state and town-by-town is how we’re going to get to full legalization someday?

DR: Right now it’s the path of least resistance. Once municipalities decriminalize, and people see that the world isn’t crumbling down, we can start talking at the state level. In certain states like Oregon or Colorado, where they’re more liberal, we might be able to go straight to a state initiative. But in Florida, it might take more time and we’ll have to start smaller. But I think it’s really going to require states to take action as they did with cannabis, and unfortunately the federal government will have to catch up. 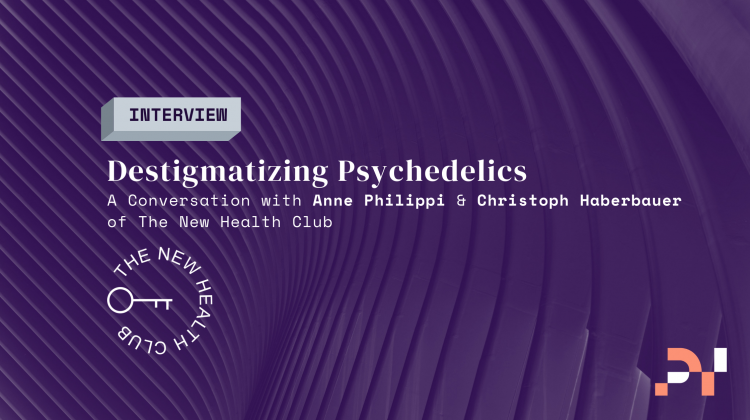